ASEA ON THE ATLANTIC

“Do you think I can get some cash if I turn them in to the ATF?” – Facebook wag

By now, every Catholic who keeps up with persecutions, egregious and latent, has heard of the latest axe-grinder at The Atlantic. Daniel Panneton inveighed against the “extremist fringe” in the Church: “These armed radical traditionalists have taken up a spiritual notion that the rosary can be a weapon in the fight against evil and turned it into something dangerously literal.”

I have my own axe to grind. I wish every person who uses "literal/literally” in a sentence were offered a choice of being lowered into a vat of boiling corn oil “literally or metaphorically” as the rest of us cackle like the wëird sisters of Macbeth. Maybe this will help aspiring writers to be more careful about word choice. 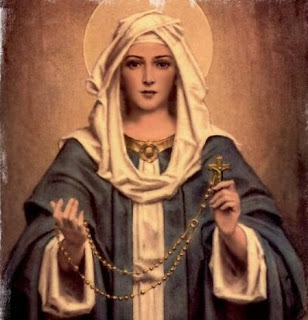 Now on to the metaphorical. All Christians, indeed all politicians, social movers, teachers in the classroom, and anyone else who has to get up in the morning to earn his or her daily bread, uses the word battle to describe the morning commute, office politics, and the effort to move hearts and minds.

“All politics is local,” as Tip O’Neill famously said, and all battles are personal. Some seem more important than others on a bigger stage. But rest assured that Our Lady takes all our petitions into account, however small they seem, and offers them to her Son. - August 27, 2022

Honor Thy Mother
Today’s Houston Chronicle carried a review which asked if "Benedetta" is the “worst movie of the year.” Based on the details of the review, I think it’s safe to say it is the most despicable and sacrilegious one this year.
Mark Kennedy opens his review: “Christmas is just around the corner and Paul Verhoeven has left a present for us during this hallowed season: A film with lesbian nuns, full-frontal nudity, tons of sex, Catholic hypocrisy and brutal self-flagellation. Happy birthday, Jesus! . . . This is like 'Showgirls' in a convent.”
I shouldn’t be surprised. The director, Paul Verhoeven, infamously directed the widely-ridiculed Showgirls (rated X – I mean, NC-17), a movie so bad that it demolished the career of Elizabeth Berkeley, formerly of Saved by the Bell fame. I guess he’s not finished ruining more careers.
What really caught my attention in this scathing review is “a Virgin Mary wooden figurine repurposed into a sex toy.”
I hesitate to even mention this, but ugly truths will out. What would be an appropriate response? Protesting might have the perverse effect of publicizing it. So, I’m going to publicize it among like-minded people to induce them to pray for reparations against the Immaculate Heart of Mary. - December 2, 2021
THE CASE FOR JESUS - BRANT PITRE
Brant Pitre addresses a number of objections to the historical proof of the Gospels. One question that always mystified me until I read this was why did Jesus seem evasive about his true nature? He spoke of the Kingdom of God, and referred to himself as the Son of Man. He performed numerous miracles, not least of which was raising two people from the dead. His disciples questioned him, the Pharisees hounded him. Jesus told the demons to shut up when they accuse him with the truth.

Up to the moment of his trial and crucifixion, he kept his true nature under a veil, as it were. So, NOW we know. But wouldn’t it have cleared things up if he had said so in the first place?

Think about your days in school when the teacher kept hinting at answers. You had to piece things together until eventually a big picture emerged. Would you remember the lesson better if the teacher had given you the answer outright, or if you had exercised your faculties? 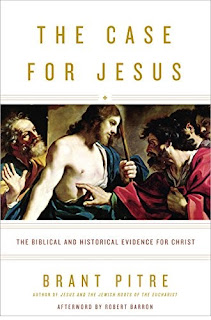 Pitre explains the history with simplicity bolstered by scripture and early Church Fathers, notably Augustine, Irenaeus and Cyril of Alexandria. The chapter on the so-called apocryphal gospels alone makes it worth the time. Engendered by the Gnostic and Arian heresies, they clash in tone and spirit with the Canonical Gospels. If you’re not familiar with the Infancy Narrative of Thomas or the Gospel of Judas – and why would anyone take a work imputed to the world’s most famous betrayer seriously anyway? – the writer lets the works speak for themselves. - March 19, 2020

FREED FROM HELL - ASIA BIBI
Ten years ago, Asia Bibi, a Catholic Christian, was arrested in some backwater Pakistani (isn’t that redundant?) village. Her crime? - she offered a drink of water to another Moslem woman. So, she awaited hanging for an act of charity upgraded to blasphemy.
After much anguish and waiting, one court approved a death sentence, another overturned it because of insufficient evidence. “But, your honor,” said the woman who brought the charges, “I spilled the infidel’s water on my burkha. Is that not evidence, or has this country turned into Satan’s playground?” Just kidding. The water dried up right after the spill, thus prosecutors could not admit the wet clothing as evidence. But even after being cleared, Asia remained in jail because, well, it’s complicated. You know how it is. Once you start letting infidels pass around water, next thing you know they’re dancing on the Koo-ran. Ultimately, she was released, then waited some more for authorities to let her get on plane and leave that hell-hole where they shoot girls for wanting to learn and set others on fire to preserve family honor.
Asia Bibi and her family at long last recently safely touched down in Canada. Now she can pass a drink of water to anyone she wants.
“I believe in my religion and in Jesus Christ, who died on the cross for the sins of mankind. What did your Prophet Muhammad ever do to save mankind? And why should it be me that converts instead of you? . . .I’m just one woman among all the very many women of this world, but I humbly believe that my suffering is like that of others.” – BLASPHEMY: A MEMOIR – SENTENCED TO DEATH OVER A CUP OF WATER by ASIA BIBI
May 11, 2019
John the Baptist: Use your head!

Crowds arrive at the River Jordan in St. Luke’s account of John the Baptist preparing the world for the coming of Christ. Even tax collectors and Roman soldiers importune him for advice.

“What should we do?”

The answer is simple: be fair and stop abusing others. Essentially, he gave the same advice one would expect to hear from Steven Covey or any of the other dozens of business gurus crowding one another on bookshelves. Of course, John the Baptist didn’t charge for his advice. In fact, some unsolicited marriage advice he gave to Herod cost him his own head. 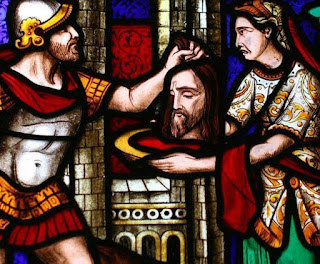 This is practical, work-a-day advice for tax collectors and Roman soldiers, the most feared and hated people in society. But it must have seemed a breakthrough at a time when crucifixion was considered normal for common criminals. Hearing it from the forerunner and cousin to our Lord makes it all the more remarkable. I can imagine others standing nearby thinking, “Wait, that’s it? They don’t have to burn down their own house or walk barefoot across the desert? You mean all they have to do is make nice?” You’d think that opening up a little window might let light come in a darkened room.

Hagiography reveals a number of Roman soldiers in the early days of Christianity converted and were subsequently martyred. Is it possible at least a few were among those gathered at the River Jordan? - December 18, 2018

THE MISSING CHILD
How often do we open the newspaper or click on the tube to learn of another missing child and find ourselves crying with the family? The mind reels at the unknowns. Anyone who has a child can well imagine parents going insane with fear. How many of us have turned around for a moment in a crowded store only to find an empty spot where a child was supposed to be standing?

I had the unpleasant experience of losing my son at a shopping mall. Within minutes I was struggling to maintain control. An older couple I knew from church activities saw the panic in my eyes and asked what was wrong. They immediately set up a plan to sweep both sides of the corridor. Thankfully, he reappeared moments later. I thanked them profusely for helping.

The fifth Joyful Mystery of the Holy Rosary comes to mind when I remember this. St. Luke narrates that Joseph and Mary had gone to Jerusalem for the feast of Passover, according to custom. Jesus was twelve, just the age ordinary kids are likely to create mischief. But, of course, he was JESUS, not an ordinary kid. Still . . . he didn’t go back with them. After a day, they began to look for him.

Already, this account is much different from what I would write: “After ten minutes, his father began to panic and run among the crowd in desperation, recruiting complete strangers to help him find his son.”

Saint Luke would never be hired by a newspaper. He simply tells us that “after three days they found him in the temple, sitting in the midst of the teachers, listening to them and asking them questions.” That’s the joyful part – he was missing for three days, then was found – at Sunday school. But in between was the agony. - December 11, 2016


GOD - FAMILY - ME
No man can serve two masters: for either he will hate the one, and love the other; or else he will hold to the one, and despise the other. Ye cannot serve God and mammon.

Jesus always used the ordinary, commonplace things of life to enable His hearers to understand the meaning of His parables. And people of His time certainly understood masters. Democracy was dying in Greece, but even then slavery was practiced. I don’t mean to imply that having to answer to a master was equivalent to slavery, but almost everyone had to answer to somebody.

This is all very literal. We’re not talking about a job application. What Jesus REALLY meant is that the world in which we live, chock-full of principles and beliefs and gods, we have to sort out which one we will absolutely serve. I’ve often heard growing up from people who should have known better that we all worship the same God. Well, from what I read on a daily basis, I’d hate to think that the God I worship is okay with honor killings and blowing up innocent people for a religious cause. Hey, is it okay if I take on two extra wives because it’s okay in some religions?

I’m reminded of two other passages also from the Bible. They seem to contradict each other, but a closer examination reveals something deeper, and helps me understand the passage on top.

If any man come to me, and hate not his father, and mother, and wife, and children, and brethren, and sisters, yea and his own life also, he cannot be my disciple. (St. Luke)/Husbands, love your wives, even as Christ also loved the church and gave Himself for it (Ephesians)

So, love them or hate them? Clearly, there’s a deeper meaning. Hate is a strong word, but Jesus uses it to say that we must put something, even something as sacred as familial love, above all else. And if we don’t put love for God and His Commandments above all else, then our love isn’t really love at all. Love for our Creator because He loves us first is what makes our love truly sacred. He wants us to put aside everything else. Jesus suffered and died for the church. I’m expected to do the same.